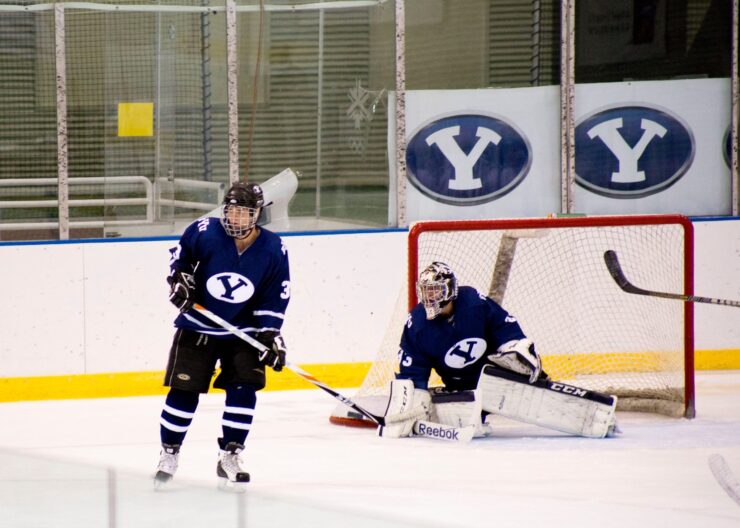 Landon has played ice hockey for 15 years. He played AA for the Ventura Mariners and then AAA for the Southern California Titans. Landon helped his high school hockey team to win the state championship and he played Junior A hockey in August Maine last season.

Josh loves the game of hockey and is excited for another year with the BYU Cougars. Josh is happily married to his wife Kellie. He served an LDS mission in the Philippines from 2005-

Tommy has played hockey for 15 years. He grew up playing AAA in California until he moved to Utah and played for the Junior Wildcats. After high school Tommy played Junior hockey for the Butte Roughriders in Montana. Last season he played for the Norway House Northstars in Manitoba, Canada.

Brett started playing hockey when he was 4 years old. He played Junior B hockey for the Utah Valley Golden Eagles and then moved on to play for Weber State University and University of Utah. Brett is married to his beautiful wife Missy and they have two children, Tristan and Bailey.

Brandon grew up playing hockey in Utah Valley. He was the captain of the Timpanogos High School team his junior and senior years and was on the all-state team. Brandon played Junior hockey for 2 years with the Minnesota Ice Hawks and was captain his 2nd season. Last year he played for BYU and was voted the team’s most valuable player. Brandon is hoping to win a national championship this year while playing with his brother Austin and friend Case who he has played with since age 11. After BYU, he plans to attend medical school.

Nate played for BYU during his freshman year and then served an LDS mission in Argentina from 2005-2007. He has been playing hockey for 5 years. He played Midget AAA in Canada and Junior hockey in Ohio and Michigan. Nathan is happily married to his wife Megan.

Ryan has been playing hockey since he was 6 years old. He played his freshman year for BYU and then served an LDS mission in Mexico. During his freshman year Ryan was named “rookie of the year”. He spends his summer instructing at the prestidious Okanagan Hockey School in Penticton British Columbia, Calgary and Edmonton Alberta.

Tyler started playing hockey at the age of 8 in Southern Alberta, with his travels taking him to Canada’s Arctic, British Columbia playing AA and AAA for the Prince George Cougars, and the Okotoks Oilers. After serving a two year mission to Hawaii learning Tongan, Tyler laced up his skates as a BYU Cougar. Tyler is studying Manufacturing Engineering with an emphasis in Organizational Behavior, and Chinese, where he plans to attend Nanjing’s China summer exchange program. His ultimate goal is to earn an MBA/JD degree, with hopes of working in corporate management. Tyler loves to play his guitar, ukulele, and enjoys wake/snowboarding.

Aaron started playing hockey at age 12. He played AA and AAA Midgets in Utah. He played high school hockey for the UCI Lone Wolves where he won a state championship. Aaron has played for BYU for the past 2 seasons. He also serves in the U.S. Air Force Reserves.

Josh started playing hockey at the age of six. He has played competitively for the last ten years for the Provo Predators and Puget Sound Tomahawks. He also played two years for Timpanogos High School. While there, the team played in the State Championship both years, taking Runner-up one year and winning the State Championship the other year. In addition, Josh played in the 2008 Utah High School All-star game, where his team won. Josh was also selected to play for Team Northwest in the 2008 Chicago Showcase.

Taylor has played hockey since he was 5 years-old. He has played travel hockey for the Utah Predators and was a captain for his Lehi High School hockey team. Taylor was also the president of his high school debate club.

Ben has played hockey since age 3 and also enjoys playing many other sports. He served an LDS mission in Hong Kong from 2004-2006. Ben is a manufacturing engineering technology major and is happily married to his wife Kelsey.

Devin played hockey in Alaska since he was around 4 years old. He also enjoys fishing for Alaskan salmon. He served an LDS mission in Chihuahua, Mexico.

Dillon graduated from Houston High School in 2008 where he played hockey and ran track for the school. He has played hockey since he was around 3 years old. He loves classic rock and Chinese food and can play the harmonica. Dillon is excited to play hockey for the BYU Cougars!

Jeremy currently owns and operates Weiss Tech Hockey Schools-specializing in technical skating instruction, development camps, and team consulting. He played Junior A hockey in Toronto, Canada and then served an LDS mission in Maceio, Brazil. Jeremy is now married to Julie and has a son named Tyler.

Kasey has been with the team since 2005. Kasey is a fan of exotic food, and a frequent patron of local Indian and Thai restaurants. He married his sweetheart two months after returning home from his mission to Bangkok, Thailand! They are proud owners of a 13’ trampoline and two fish. Next year Kasey will be attending medical school and plans to serve a mission with his wife after retirement. ®